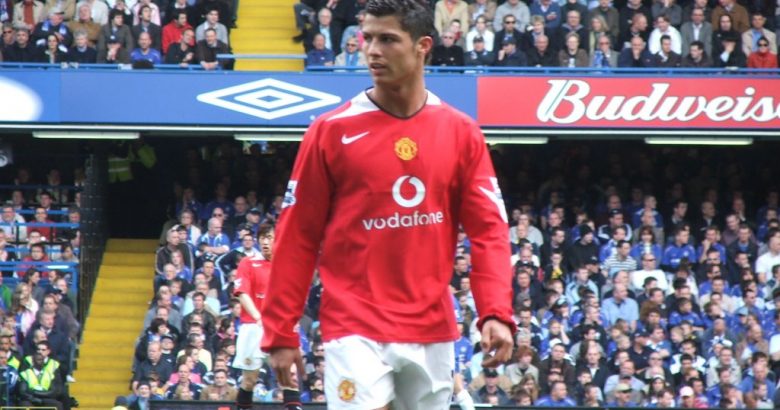 Cristiano Ronaldo was born in Funchal, Madeira, Portugal on February 5th, 1985. Cristiano is son of a cook, Maria Dolores dos

He didn’t have the best financial conditions, but since he was young he had an initial interest in football. At age 17, the manager Laszlo Boloni was impressed with Cristiano and called him to play the Primeira Liga at Braga Club in 29 September 2002. In 2003 Ronaldo’s moved Manchester United and it made him the first Portuguese player to sign with the club. Cristiano was transferred by a value of £12.24 million. It made him, at that time, the most expensive teenager in the English football history.

His first goal for Manchester United was scored with a free-kick over Portsmouth on 1 November in a 3–0 win.

Three more league goals followed in the second half of the campaign, the last of which came against Aston Villa on the final day of the season, a match in which he also received the first red card of his career.

In 2007, Ronaldo became the first player to win all four PFA and FWA top awards. He was also third in the 2007 FIFA World Player Vote and second in the 2007 FIFA Ballon d’Or. In 2008, he won his first Champions League with Manchester United, being considered the best forward and the best player in the competition.

After much speculation, Real Madrid reached an agreement with Manchester United for the transfer of the actual best player in the world in 2009, for the announced sum of 94 million euros on June 11, 2009. Cristiano Ronaldo became, this way, the most expensive contract in the history of the football world until then, surpassing the values of the transaction of Zinédine Zidane.

One of the most confident and dedicated football player in the world, Cristiano is also a family guy. He has been married since 2017 to Georgina Rodrigez and has 4 children, 3 are adopted and they have twins coming on the way.

Among polemics Cristiano Ronaldo has a very steady career and is a very devoted athlete, no matter the club he played.